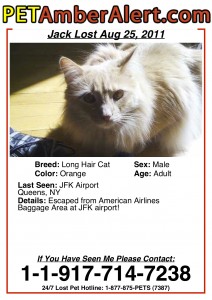 Jack the cat, at large at John F. Kennedy International Airport since escaping from his cage in the American Airlines baggage claim area two months ago, has been found.

The missing cat got loose in the airline baggage center at JFK on Aug. 25, after Karen Pasco checked Jack and another cat in as cargo. A day later, parts of the airport were shut down in preparation for Tropical Storm Irene.

Since then, more than 16,000 Facebook fans of Jack the Cat is Lost in AA Baggage at JFK have been following search efforts that have included at least two Jack the Cat Awareness days, a PetAmberAlert and the hiring of a pet detective.

“I’m relieved and happy that Jack has been found,” Pasco said. “He needs some time to get back in health after the ordeal, but is in good hands with the vets who are taking care of him.”

“American Airlines is happy to announce that Jack the Lost Cat has been found safe and well at JFK airport. American’s team of airport employees have been focused on the search effort since Jack escaped on August 25, 2011. Jack was found in the customs room and was immediately taken by team members to a local veterinarian. The vet has advised that Jack is doing well at present.”

Bonnie Folz, a New York-based search coordinator, saw Jack last night. “It was great to know it’s him and to know he’s safe,” she told msnbc.com. “He looked fabulous to me. His eyes are big and beautiful and bright, although he’s lost some weight and he needs some grooming. He’s on IV and is having some tests to make sure he’s OK.”

American Airlines said once Jack is ready to travel, the airline will fly him to California to be reunited with his owner.

In a report of the incident filed with the Department of Transportation and included in the Air Travel Consumer Report issued this month, American Airlines reported that, “The clerk responsible for transporting the kennels to the FIS area loaded one kennel on top of another, and while the kennels were stationary and waiting to be loaded on the aircraft, the kennel positioned on the top fell to the ground. The impact of the fall caused the kennel to separate and the cat escaped.” JFK Aiport Lost and Found