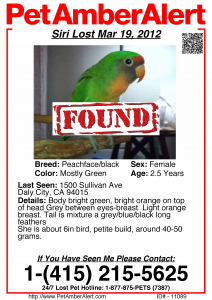 ” How can I possible describe your service other then totally efficient, the out reach was amazing and you did make a miracle happen! How else does a small lovebird make it from Daly City to Petaluma in three days and then find herself back in the arms of her family in San Francisco! “

Clients Personal Story: I received a phone call from a man named Chris in Petaluma CA. At5:30pm. He told me he thought he had my bird . This is his story: he was attending a wake for his father in law in Daly City on March 19. He heard a group of crows squawking outside a window and looked down to see a small green bird starting to be pecked at. He opened the window and she flew in and landed on his brother inlaws arm. He went out and bought a cage and some food for her. One of his wife’s cousins took a picture of this bird inside the cage with her phone. Chris took the bird back to his home in Petaluma and bought some more toys and pellet nibbles for her. ( Siri is a very friendly bird and actually wags her tail when she is happy to see people she knows and/or likes. ) I think if a bird flew in through a window on the day on my fathers wake I would see it as a sign too! I don’t blame them for wanting to keep her at all. They never said this but he sold me the cage and everything in it and it was set up beautifully! I also felt some sadness from both of them but mostly glad they helped make a happy ending come true. He held the phone up to her and I spoke to her for a few seconds. They said she was getting very excited/anxious so they took the phone away. I knew then it had to be her. Chris told me that his wife’s cousin new someone who worked as a coordinator for Ringneck and Rosella , Conure and Education Teams. I guess she told her about this incident and sent her the photo. It was women named Priya Tuvell, the coordinator who gets the petamberalerts and noticed the unmistakable markings on Siri. She had actually sent me an email @3:30 that afternoon but I had not checked my email that evening. The story was a lot different so after we drove up to get Siri (in the wake of dispare coupled with some hope and pure shock. (We had given her up as three nights outside in the cold was not feeling likely to have a good outcome.) we got her and were so thankful but just trusted out hearts and of course recognized her and she rushed to out hands through the cage to nibble at our fingers , I hung up her snuggle hut for the long ride home. She literally passed out! After I put her to bed in her room I checked mt email. It was from Priya and her text was that a friend of her had a cousin who found a lovebird at a cemetery in San Francisco and she didn’t know what happened to it exactly. She thought her cousin and husband may have left it at the mortuary there and I should try to call them. Then I saw thus picture of a bird in s cage. I emailed her back and said it wasent my bird because I just found mine and I couldnt see the grey cheeks in this bird. I said I would try to help find the owner of that bird though . I sent the email. Then I looked at the photo again and noticed the swirls on the cage door. I ran in to look at this new cage Siri was now in and the cage design matched! Wow, was I still in denial, shock, or what?! I emailed again and retold the story I had. She confirmed the fathers funeral and then we new we had a match. So the connection was there!