Arizona woman to fly into Wisconson to pick up lost dog 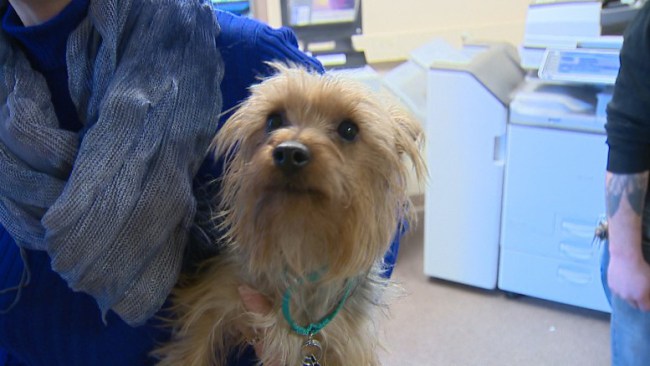 This Yorkshire terrier named Nicholas was found in Howard Feb. 6. Somehow he arrived in Wisconsin from Arizona

An Arizona woman is expected in Brown County this week to pick up her small dog one month after it turned up in Wisconsin.

A local animal control officer took Nicholas, a Yorkshire terrier, to the Bay Area Humane Society on Feb. 6. The humane society says the dog was found wandering the streets in Howard. A check of the dog’s microchip showed it was registered to Linda Baldazo. The officer called Baldazo, who said her dog had been missing for a few months. She last saw it playing outside in her fenced-in yard.

Baldazo is scheduled to fly in to Austin Straubel International Airport Friday afternoon to pick up Nicholas.

The humane society says it has been trying to get Nicholas back to Arizona for the past few weeks. A return flight was scheduled for Feb. 10, but the weather on that day was too cold for the dog to travel in the cargo area.

Zoe was returned to us after 4 days on the run! A man spotted her on his way to work and remembered the amber alert phone call to his home 2 days prior.

Sancho has been found! We are absolutely overjoyed....your service changed our lives. A million, billion thank your does not even begin to cover it...