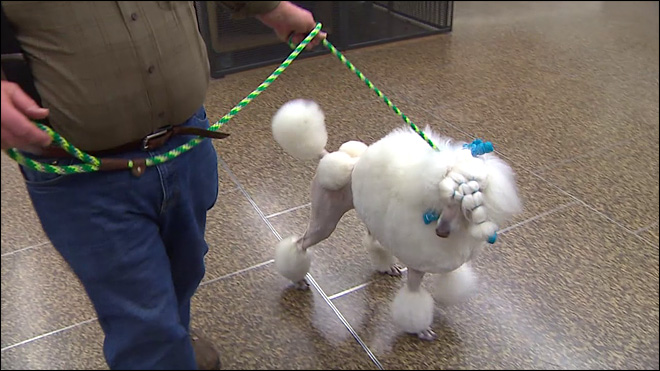 One of those was a standard poodle named Paris. It was the responsibility of the owner’s grandfather, Greg Gorder, to bring Paris home to Seattle on Wednesday.

But as Groder was sitting on Delta’s 4:05 p.m. non-stop flight from JFK to Sea-Tac Airport, he and other show dog owners on the flight didn’t see their dogs being loaded into the cargo hold of their Boeing-737.

“We suddenly realized our dogs aren’t on there, even though the stewardesses were telling us they were,” said Gorder.

One dog owner used his FlyDelta app to determine the crates of some of the dogs were not loaded onto the plane. The app allows passengers to track the location of their tagged luggage. The dog owners complained.

“We just wanted to establish that our dogs where still on there,” Groder said. “They couldn’t do it, wouldn’t do it.”

Show dog owner Sarah Pearce says the plane sat at the gate for an hour while the owners waited for an answer from Delta personnel about their dogs.

“Once they realized they couldn’t find our dog and had no idea where they put him, we had to get off the plane and wait until they could find them,” she said.

The owners were given the choice to either fly on without knowing where their dogs were or take a later flight with their dogs. All the owners with dogs not accounted for got off the plane.

“They didn’t know where the dogs were, period,” said Gorder.

Pearce says the group waited four hours for Delta to deliver the dogs to them in the terminal. But owner Jenny Dawson didn’t see her dog. She was traveling with her service dog inside the cabin and her show dog was suppose to be on board in her crate in the cargo hold. She was surprised to see Delta bring up the empty crate that was for her service dog.

“I had an empty crate and a crate with a dog in it, and they pulled off the crate with no dog,” said Dawson.

Her show dog went on to Seattle on the plane. She had gotten off the plane thinking her show dog was lost with the other dogs.

“I was livid,” she said. “It was like, really, can you not look in there and see there is no dog?”

A Delta Airlines spokesman disputes some of the claims made by the dog owners.

In a statement to KOMO News, Mike Thomas says there was “limited space in the cargo compartment,” which prevented all the dogs from traveling on the same flight.

He also said “the dogs remained in Delta’s constant care while the airline worked to re-accommodate both the customers and their animals.”

Delta has apologized for the inconvenience and given the dogs and their owners a free overnight stay at a hotel near JFK, a refund of their $200 dog fees, VIP service at the airport and seats for the dogs in the cabin for the return flight to Seattle.

He suggests passengers traveling with animals should try to fly on the same plane with their animals in the cargo compartment. Danishek says it’s worth paying the extra for a non-stop flight rather than risking issues with your pets on connecting flights.

Crated animals are considered luggage. Try telling that to a show dog owner who’s returning from the most prestigious dog show in the world.