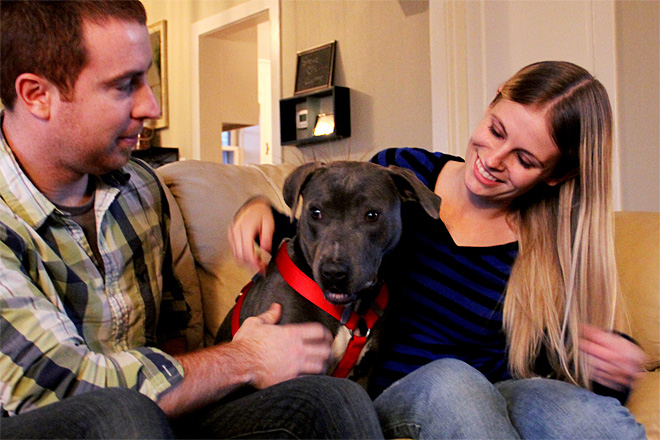 Summer, a pit bull-terrier mix who ran away from her foster home was lost for almost four months. She is now back with her foster owners Corinne Hashenberger and Steve Staten at their home in Salem, Ore., on Tuesday, Jan. 13, 2015.

This isn’t one of those farfetched tales about a canine wandering across state lines and thousands of miles from home before being found.

But this is an improbable story about a pup named Summer who ran away and was found 112 days later thanks to the relentless efforts of volunteers from the Willamette Humane Society, Lost and Found Pets of Salem Oregon, and the community at large.

“The network we have now saves these pets and brings them home,” said Rhonda Murray, who corralled the now nearly 1-year-old dog on Sunday, Jan. 11. “The power of networking is so phenomenal on social media.”

A photograph of the lilac-colored pit bull-terrier mix, posted on the Lost and Found Pets Facebook page, ultimately led searchers to the blackberry bushes behind two businesses on Commercial Street NE near the Y intersection with Front Street NE.

Summer was still a puppy when she busted out a screen door on Sept. 21, jumped off a 30-foot-high deck, and ran. It was her first night at her new foster home in West Salem. She had come to the Willamette Humane Society through its partnership with California-based Shelter Transfer Animal Rescue Team (START).

Fliers were posted throughout the community, noting Summer was wearing a pink collar with tags and was last seen Sept. 23 near the boat launch at Wallace Marine Park.

There were numerous sightings in the days immediately following, including her in various locations throughout the 114-acre park along the west bank of the Willamette River. Volunteers scoured the area and enlisted the help of a search dog, which tracked Summer’s scent to a den in the brush. But there was no sight of Summer.

At one point Idi Vargas, who manages the Facebook page for the volunteer-run organization that collaborates with the humane society, set a portable barbecue near the Union Street Railroad Bridge and grilled hamburger and bacon in hopes of luring Summer out.

The trail eventually went cold. Searchers speculated Summer connected with someone from the homeless crowd that camps out at Wallace Marine Park. As the weeks and months passed, they lost hope.

“It was such a heartbreaking story how long she had been out there,” Murray said. “We all thought she was dead.”

And then Jamie Scott, one of several heroes in this rescue, spotted a dog on the side of the road on Sunday, Jan. 4, as she drove home from her job at the South Salem Petco. She had to turn around twice, because of the one-way traffic, but the dog was still there in a parking lot off Commercial Street NE.

“I was looking for treats in my car, and I couldn’t find a leash,” she said. “I have two dogs (both rescues), and I work at a pet store. I usually have all that stuff in my car.”

Scott wasn’t able to get very close, because the dog was so skittish. But she snapped a photo with her cellphone and later posted it on the Lost and Found Pets of Salem Oregon page, along with the location.

Volunteers, including Corinne Hashenberger and boyfriend Steve Staten, were eager to resume the search. Within a couple of days, they spotted Summer behind a fence along a brush-covered embankment of Mill Creek.

They brought a smorgasbord of food and treats to the site, including sausage McMuffins and hash browns, hamburgers, dog food and wet cat food, even a breakfast burrito, and set up a trap.

“She wasn’t going for it. She was too smart,” Hashenberger said.

Summer also wasn’t that hungry. Searchers came to find out that multiple people had been feeding her all this time, including employees at Elite Auto Service, one of the nearby businesses. The owner said the dog had been living in the area for more than two months.

Another break in the search came when volunteers brought out a couple of secret weapons, a Chihuahua named Macho and a Pomeranian named Jersey. Macho belongs to Hashenberger and Jersey to Murray.

Murray eventually caught her — seven days after Scott stopped to take that photo — by putting liver dog treats in the bed of her pickup, which was covered by a canopy. When Summer jumped in, Murray quickly closed the tailgate and canopy door.

Summer was taken to Willamette Humane Society, where a scan detected her microchip. She was no longer a puppy, much taller and 20 pounds heavier, so the microchip was vital in confirming her identity.

Hashenberger is now fostering Summer, taking extra precautions to make sure the dog doesn’t bolt again. Summer doesn’t even go on a potty break without a double leash, one on her harness and the other on her collar.

Even with the added security, Hashenberger reports that the dog seems happy and content.

Summer eventually will be available for adoption through Willamette Humane Society, but shelter spokesman Jay Levitre did not know when.

Thanks for your help, we located him a few hours ago. You run a great service and I'll be sure to let my friends know all about it!

I finally have my cat, Marley, back as of early this morning. Everyone was trying to get him with no success. I set up a live catch trap at a lady's house that saw one of your flyers. Actually she started chasing a piece of paper with you info, called you and got my phone number. At 5AM I got a call that my cat was in the trap. I took him in the trap to the animal ER and his microchip matched. It was dark so I could not see him until he was in the light. I took him to his vet when they opened and he tested negative for any bad things. I came home and plugged in the Christmas Tree this morning. I HAVE MY CHRISTMAS MIRACLE AFTER 4 MONTHS THANKS TO YOU! YOU ARE AWESOME!