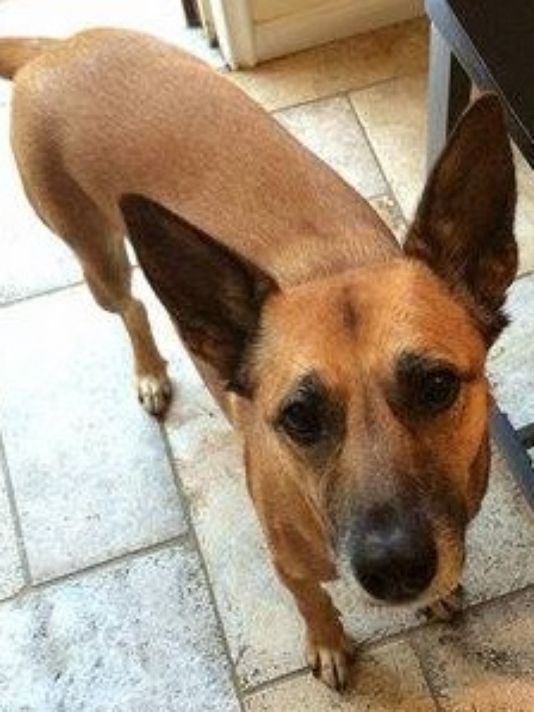 Sahara, a brown Belgian Malinois, has been missing since last weekend.

If dogs could talk, Sahara, a Belgian Malinois from California, could spin a yarn about her adventurous 25 hours on the lam in subzero temperatures, her first time in the snow and all the critters she met — or evaded.

Sahara slipped from her owners’ hotel room Tuesday afternoon after a housekeeper mistakenly let her loose. While Sahara was beginning her adventure, it was a nightmare for her owners, Nick Hoeh and Rick Dunkle, who moved here Saturday from California.

“We’re just going off of anything we can. If we hear it, I’m out there,” Hoeh said a few hours before Lafayette Animal Control found the 31/2-year-old pooch, which Hoeh and Dunkle rescued from an abusive home.

Animal Control officers spotted Sahara in the 900 block of Greenwich Road as the sun painted the western sky pink and the shadows grew long. It wasn’t the first sighting during her 25 hours in the wild. She had been spotted at Cracker Barrel, Hour Time Restaurant and the Lazy Boy Furniture store, but each time she ran from would-be rescuers.

Officers corralled Sahara and called Hoeh and Dunkle, who had been up all night and day looking for her.

“They had her in the back yard,” Dunkle said. “We got to the back yard and showed her her Chihuahua best friend and she came running out.”

Asked where Sahara spent the frigid night, Hoeh said, “No clue. Probably back in the forest.”

Minutes after her reunion with her family, she curled up at Dunkle’s feet in the front seat of the couple’s car.

Dunkle said, “We’re going to take her to the vet to be checked out, but she seems fine.”

Finding Sahara was the first bright moment in an otherwise unceremonious arrival in Lafayette to begin a new life in a new state.

Hoeh and Dunkle are staying at a hotel because a pipe burst in their new home soon after they closed on the house and before they could move in, Hoeh said. The water caused $75,000 damage to the house they just purchased, he said.

“The moment we got into our new home, we heard like Niagara Falls in our house,” Hoeh said. “We saw that there was water completely pouring out of the sink. It destroyed the brand new hardwood that just got put in.”

This unfortunate turn of events forced them to immigrate to a local hotel, from where Sahara escaped.

“Thanks to … Lost and Found Pets of Greater Lafayette. Thank you,” Dunkle said. “They found our girl.”