FAMILY BUYS BACK LOST DOG AFTER SEEING IT ON CRAIGSLIST

The term “dog flipping” refers to when a pet is stolen and then put up for sale on sites like Craig’s List. 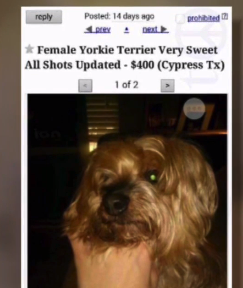 For a family in northwest Harris County, it hit home last December when their 11-year-old terrier went missing.

‘Sushi’ apparently escaped through a hole in the backyard fence. The same day, Kara Lowe’s husband received a strange call asking if he was missing a dog.

When the family couldn’t find Sushi, they called the number. The person who answered denied any knowledge of a dog.

The family had its suspicions.

A few weeks later, a dog identical to Sushi was posted on CraigsList.com. An attempt to confront the seller failed. The trail went cold.

A few days ago, a new Craigslist.com ad was posted. This time, Kara Lowe contacted the seller and set up a meeting, which took place Friday on a Sam’s Club parking lot in Cypress.

“I didn’t think it was her,” she says. “Her coat was a different color. She’d been dyed.

It didn’t help that the dog didn’t seem to know her.

Still, the sale went through.

“Fifty dollars, and for me, it was priceless,” said Lowe. “I figured even if it wasn’t Sushi, it was somebody’s dog that we could save and try to return.”

That wasn’t necessary. Lowe’s friend, an animal rescuer who accompanied her to the buy, brought along a microchip reader. The dog was Sushi.

On Friday afternoon, she seems to be recalling her old life, playing with the family’s children and their other dog.

For Kara Lowe, Sushi represents 11-years-old history, the pet she had before her marriage and her children.

Her advice to other people looking for lost pets — look on CraigsList.com and then start investigating. And be sure to microchip your pet.

Bogey was found and turned into the St. Louis Animal Control. They received your fax alert and called me right away. Thank you!

We found Charlie thanks to your service! Someone heard the alert and then a day later saw him in his backyard, cornered him, and then called us. We are forever grateful to your service. Please put us on any list to help find other lost dogs in the area! We want to pay it forward :)