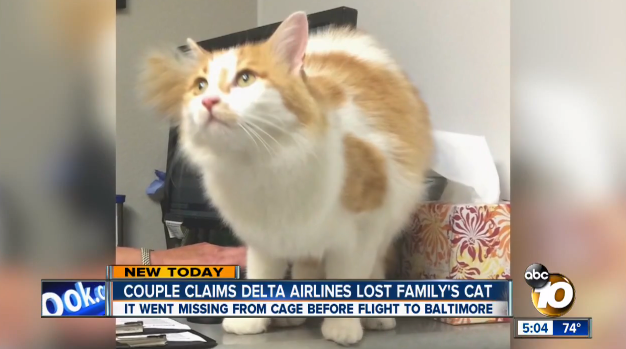 Over the past several years, Delta AirLines Lost and Found has been at the center of numerous tragic stories of regarding pet transports. Now, a family who was flying their cat on the airline from San Diego to Baltimore is hoping their tale of loss ends on a happy note.

ABC 10 News reports that an hour after a San Diego couple dropped off 5-year-old Mickey at the Delta cargo office Friday night for his trip to be reunited with his owner – the couple’s 12-year-old niece who recently moved out of state – he was missing.

The couple says they received a phone call from the airline informing them that the cat had escaped its cage and was wandering the tarmac.

The couple claims that the cage – which they took a picture of before leaving – was not secured with zip-ties by Delta employees.

A spokesperson for Delta lost and found says the airline is aware of the missing animal and has worked with the family to locate it.

Since learning of the cat’s escape, the couple has been at the San Diego International Airport setting up traps and handing out flyers with Mickey picture in hopes that the animal will be found safe.

I HAVE TO THANK YOU SOOOOOOOOOOOOOO MUCH! YOUR SERVICE REALLY WORKED! MY NEIGHBOR GOT A PHONE CALL FROM YOUR SERVICE TODAY & THEY CONTACTED ME. I WAS REUNITED WITH MY BEAUTIFUL PUPPY. I AM SO THANKFUL FOR YOUR SERVICE! I HUNG 40 POSTERS EVERYWHErE BUT YOUR SERVICE IS WHAT BROUGHT MY DOG BACK TO US!!! THIS IS TRULY A MIRACLE!

I was so afraid this was a scam or a something, and it's NOT. Their flyers were everywhere they said they would be (I checked, trust me!!!), The first person who called me specifically mentioned seeing Daisy's PetAmberAlert.com's flyer in Petco, and upon coming across her in a parking lot they called Petco to get the number off the flyer so they could call me. Three hours later Daisy was home.