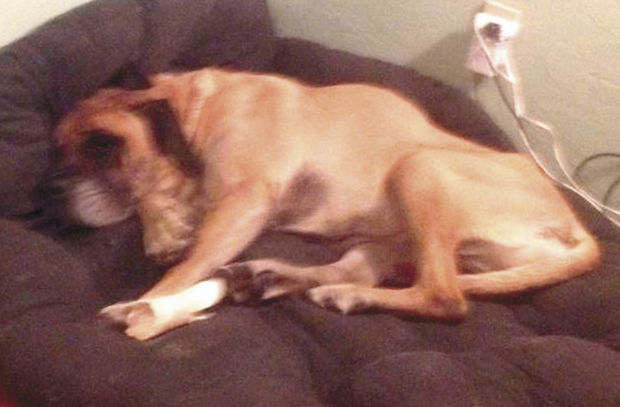 “She was trapped unless she swam out,” Foubert said. “It would have been very hard for her. She looked pretty rough and she was scared.”

Foubert said Floro kept talking with Madison. She was “skittish and first.”

Foubert said they tried feeding Madison Chex Mix, “but she didn’t like that. I had some sweet and salty bars and she ate two of them.”

Floro decided to stay with Madison while his hiking partners went back to the road to call the Sheriff’s Office. They were not carrying cellphones, but stopped at the Mountain House and were allowed to use the phone.

While waiting for Search and Rescue, the hikers walked to House Rock Campground, where they told other campers of Madison’s plight. The other campers contributed dog food, flashlights, warm clothing, towels and a sleeping bag. Bananas, apples and other food also were contributed.

“One couple was walking their dog and the man gave us the flannel shirt off his back,” Foubert said.

They then hiked back into woods, reuniting with Floro and Madison, and waited for Search and Rescue to arrive.

Riley said that search and rescue Deputy Lisa Chase had been in the area earlier in the week and remembered seeing a poster for a missing dog. The dog was identified as Madison; she had been lost in the area of Sevenmile Horse Camp on July 4, when she and her owners became separated.

A team of Linn County Search and Rescue volunteers deployed to the area about midnight and made contact with the family about 3 a.m.

All family members were found well; Madison was sleeping comfortably in the sleeping bag. The team decided that due to the difficult terrain they would wait until daylight to attempt getting Madison to safety.

About 6:30 a.m., the group began the trek out of the woods, including a climb up over and back down a steep rock face and several hundred yards of travel in a creek. At one point, Madison had to swim as the group traversed in waist-deep water.

Using GPS, the team was able to identify a route from the creek uphill to the Santiam Wagon Road, a hiking trail that led back to the main road. This route included moving cross-country through thick brush and up to 200 feet of elevation climb.

Foubert said her family loves animals, which made their decision to help Madison an easy one.

Floro said the good Samaritans plan to visit Madison at the family farm next week after she gets healthier.

Riley emphasized that the first priority of the Search and Rescue Team is preservation of human life, but he added it’s a bonus when the team can also help man’s best friend.

“The mission of search and rescue is about saving lives,” Riley said. “When they found the family safe and sound, they were more than willing and able to help rescue Madison.”

I was so afraid this was a scam or a something, and it's NOT. Their flyers were everywhere they said they would be (I checked, trust me!!!), The first person who called me specifically mentioned seeing Daisy's PetAmberAlert.com's flyer in Petco, and upon coming across her in a parking lot they called Petco to get the number off the flyer so they could call me. Three hours later Daisy was home.