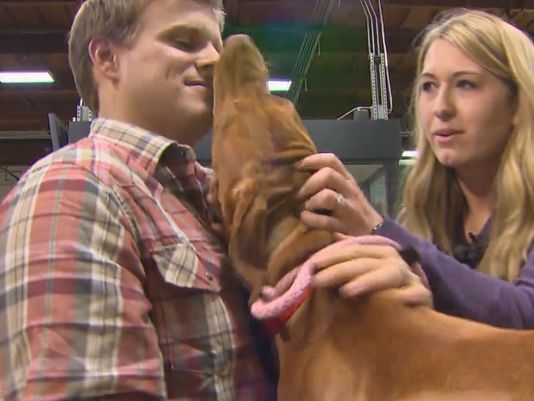 Penny the missing pup has been reunited with her Washington state owners after a cross-country trek that led her to the Pittsburgh area.

A 7-month old Vizsla is back with her parents after getting lost and taking a 2,400-mile road trip with a truck driver.

“Penny” ran away from her owner’s office in Royal City on December 19. A truck driver picked her up and traveled with her 2,400 miles to Pittsburgh, Pennsylvania. He dropped her off at an animal clinic where vet technician scanned her for a microchip and discovered she was lost.

Kendra and Colt Brown had created a Facebook page called “Bring Penny Home For Christmas” in an effort to locate their dog. When they got the call from Banfield in Pittsburgh, they found a nearby animal rescue group willing to pick up Penny and take her to Baltimore.

Alaska Airlines then flew Penny home for free. She landed at SeaTac on Friday night. Her owners were ready with treats and a lot of kisses.

The PetAmberAlert went out and in 4 hrs I received a call to come pick him up from the people who found him. Thank you so much for all you do!

Almost instantaneously after the phone alert went out we got a call from a family in our town who had seen our dog in their back yard. I had to climb over their fence and get around their Pit Bull, but I got my little Pug back! Bless you.

Three days after I lost my parrot I ordered a pet amber alert. Greenburgh Animal Control came to my workplace and asked me if I was looking for a lost parrot. They told me where they had brought Mikey, and I was reunited with him! I credit Pet Amber Alert with this.