I got a call from the Woodridge police saying a woman had reported she had found a dog two days previously and that she was going to hold onto him for a few days before giving him to a shelter. When the police received the Pet Amber Alert they remembered the woman had called two days previously. They called me and gave me her number saying she had reported a dog similar to the one in the photo. When I called her she described Gizmo perfectly, I then went to her house where I was reunited with Gizmo once again! I’m so happy to have him back home 🙂 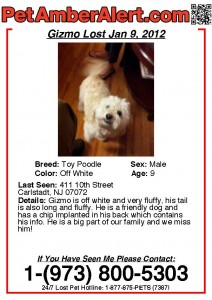